To start off my OAT series (Other Authors Thursday), an alternative history: what if President Lincoln had survived the shooting at Ford’s Theater that night 150 years ago this month? 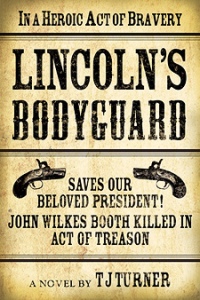 Seven years after saving the President, Joseph Foster still needs the whiskey to ward off the demons. On the rare nights he hasn’t consumed enough alcohol, he remembers the promise made to his dying wife. But it was a vow he couldn’t keep, no matter how many men he killed in its pursuit. His daughter is out of reach, stolen to avenge the failed assassination, and the President has forsaken him, blaming Joseph for the simmering insurgency that grips the country and traps the Old Man in the gilded cage of the Presidency. Joseph is haunted, and not even the legends of his Lumbee Indian ancestors offer guidance.

Find LINCOLN’S BODYGUARD at your local bookstore, or online at all the usual places.

Author; teacher; seeker of truth about life, the universe, and everything
View all posts by clpauwels →
This entry was posted in Uncategorized. Bookmark the permalink.