…and they can be interesting!

Trudy Krisher’s FANNY SEWARD: A LIFE (recently-announced winner of the Silver Medal for Best Regional Non-Fiction from the Independent Publishers Association) for adults:

“At last Fanny Seward, the precocious, perceptive daughter of Secretary of State William Seward, gets her own book, the book she deserves: warm and literate and engaging.”—Walter Stahr, author of Seward: Lincoln’s Indispensable Man 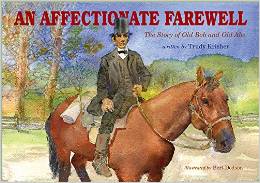 …and AN AFFECTIONATE FAREWELL, for the younger set:

“He was a big horse, proud and strong, with a swayback that emphasized the heft of his haunches. His dark bay coat was the reddish-brown color of mahogany; his legs, mane, tail, and muzzle were coal black. But as he clip-clopped his way to the house at Eighth and Jackson Streets in the bustling prairie town of Springfield, Illinois, he did not know that he was trotting into history. His new owner was to become one of the most important of all American presidents.”

So begins the story in which we learn of how Old Abe and Old Bob got their names and how they journeyed together across the wide open prairies, sharing good times and bad, hardships and rest. We learn of President Lincoln’s love for animals and we discover from an early age his dislike of cruelty to them as well as to humans. Observing slavery first hand as a young man, he was finally able to do something about it once he became president. Old Bob was there from the beginning of this young lawyer’s memorable career to the very end “escorting his master on his final ride.” This is a story for animal lovers and history buffs alike with an evocative text and delightfully realistic watercolor illustrations.

Trudy’s wonderful work is available in all the usual places.

One response to “OAT: History lessons aren’t just for the young…”