A line has been crossed

Today the ugliness that has been festering in the United States went from ideological to reality for me. Now it’s personal. That 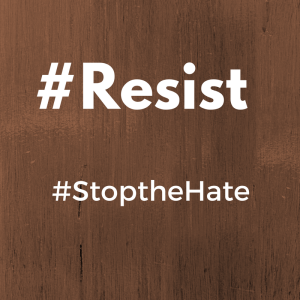 doesn’t mean I haven’t been outraged before this, that I haven’t taken all the upheaval seriously and been sick at heart, but now….

For several years I’ve been involved in modest protest (emails, phone calls, petitions, social media posts), and more frequently since the November election, speaking up for those who are being marginalized in alarming numbers:

On January 21st, Hubby and I joined the Women’s March in downtown Dayton, Ohio, in support of so many others:

On January 29th, Hubby and I returned to downtown Dayton to protest the Muslim ban enacted by the latest (at that time) Executive Order from the White House.

On January 30th, I mourned with many online for the terror attack by a white male Christian (?!) at a mosque in Quebec City, Ontario, where six people were killed.

Today, January 31st, all the others we’ve been standing for, fighting for, protesting for, mourning for, became us. Became family. Became real.

Along with 16 other Jewish Community Centers in multiple states across the country, the Sylvania (Ohio) YWCA/JCC was evacuated today because of bomb threats – the third time in the past month that a spate of such threats have targeted these types of institutions.

Today, the hate promulgated and encouraged and modeled by our new president became real.

If you voted for DT, for this man who fosters hate and violence, this man who disdains any life other than of those who look like him – white, male, professed Christians, preferably wealthy beyond comprehension – and you’re not outraged, you’re not speaking out, you’re not taking a stand and holding him accountable, then you’re enabling the hate. You’re defending the violence. You’re contributing to the chaos that is destroying our government.

And stopping the actions, or inactions, of you and your ilk – friend, family, neighbor, or stranger – has become my life’s mission.

12 responses to “A line has been crossed”